I am writing this on the last day of the year from Cafe Werner, just off the Town Hall Square in Tartu, Estonia, though by the time I finish writing I will likely have moved to another of my regular places to sit and drink caffeine or other types of drink, and to watch people in this out of the way city near the bottom of an out of the way country, somewhere near the top of the world. It’s only slightly below freezing outside, but snow is forecast to begin around the time the clock strikes midnight and fireworks light up the Baltic sky to usher in the new year.

This is my fifth trip to Estonia. But it is my first without any clear, discernible purpose aside from being away from Waco. In the 90’s I came to spread the gospel, or at least a version of it that I hardly recognize any more. In 2015 I came, wounded, to reflect and write about a time and place in my life that had seemingly come to an end. Seemingly, in part, because it had, and in another part because the way forward was unclear. Earlier this year I came to celebrate Estonia’s centennial year as a Republic, and to experience cold, real cold, for the first time.

When I found cheap tickets for the holidays (which turned out to be free with credit card points) I had a vague notion of coming and interviewing young Christians for a writing project about how people come to faith, and keep faith, in a culture that has no cultural expectations for religious practice. For example, when you move to a new town in Estonia, no one would ever imagine asking you “Have you found a church yet?” Either because of or in spite of this, Estonia is considered by many to be the least religious country in the world, as most of us understand religion.

But it is the holidays here in the same way it is the holidays in Waco, which makes such heady conversations difficult to have. Most of my connections are either out of town or hibernating the winter away. Which is exactly what I’d do if I lived here.

So instead, this time has been an opportunity to reflect on my 2018 life, and prepare for the 2019 one.

I should start here in Tartu, as I’ve spent just shy of a month here in the past year. The most meaningful part of my time here in February was discovering and writing about Barlova, a local bar that is typically full of people from all corners of the world. In more than a few ways, it feels like a little slice of heaven here in Northern Europe. I was so mesmerized by it that I wrote this piece that was published in Estonian World, and ended up being one of the most widely read pieces I have ever put out for the world to read. You can imagine my joy when I walked through its doors last Thursday and was greeted with a loud round of people exclaiming my name and giving me hugs.

Speaking of writing, the book I wrote while here back in 2015 and put out in blog form (this blog, actually) the next year, was published by a small press in September. This gave my story a second life that I didn’t expect it to have, and for that I am grateful for the guys at Patristica for putting in the work to get it out there in a form you can hold. As I’ve scanned through the book over the past couple of days, I’ve been struck with this thought: If I had it to do over again, I would have written a completely different book. But I don’t think I could have come to that conclusion if I hadn’t written what I did. I think there may be a lesson about life, regret, acceptance and growth in there, but I’ll leave that for you to decipher.

In 2018 I came to the conclusion, somewhat reluctantly, that it was no longer worth it to try to engage in social media bombast via Facebook in hopes that some people living on the quiet sidelines would be learning from the dialogue that came out of it. Maybe this was always the case, but if after two years of, well,  let’s say national “dialogue” and civic engagement minds haven’t been changed, then they probably aren’t going to be changed. I didn’t go as gently into that good night as easily on Twitter, but I am trying to do better.

It was one of my best years in a long while. Relationships that had been rocky for some time were stabilized. Toward the end of the year I put in some difficult time and work for my introverted self to make space for new people, to open my home for meals and conversation, and to have more intentional conversations with those I love. The end of this year felt like a good springboard to 2019.

In the last couple of weeks I finished a book about the Bible from the heretic Rob Bell, which has energized and motivated me to commit myself to this book that I’ve had such a complicated relationship with for my entire life. I’m excited for where that will lead.

Professionally I’m looking forward to new opportunities to help shape the understanding of congregations and people of faith about what it means to lovingly engage with the poor and hungry in ways that extends dignity to those who need it, but that requires difficult conversations among those with the power to change systems designed to keep people in need.

Toward the end of this year I found out I had been selected to participate in a four weekend intensive cohort studying the Enneagram with Suzanne Stabile at Life in the Trinity Ministries in Dallas. I’m excited about the opportunity to understand myself and others through this, and to be even more, I mean less, annoying with talk about this helpful tool.

I’ve also begun to write my next book, which will be a collection of essays exploring the connections and dissonances between my Christian faith and my love of country music. It’s something I’ve been exploring for years, but I’ve decided to finally dive in. Like the last book, I’ll shop it around to traditional publishers, but if no one bites, I’m not going to knock myself out trying to get it out there. I’ll find a way.

Lastly, speaking of writing, I’ve decided to make this, 17dutton.com, my permanent blog home, and to recommit myself to this form of writing more regularly. There’s some philosophical and personal reasons for doing this, which I may explore on a future post. But mostly I like this layout better, and it is easier to update.

Happy New Year to you! Wherever you are, I pray God’s grace finds you.

As expected, I began writing this in one place and ended in another. Here are some pictures of my journey from beginning to end…

I began at Cafe Werner. Here is a picture of their bake case I took a few days ago, which helps explain why fitting in the plane seat on the flight home is always more difficult than on the one here.

After Werner, I decided to walk around Raekoja Plats for a bit to pretend I’m walking off all the calories I have eaten. You can’t see it very well, but behind these glass buildings, people started to gather for a Flash Mob practice.

I then decided I needed a burger from Sheriff Saloon, a Texas-themed restaurant. I have an interesting relationship with this place. If it were in Waco, it would probably be about the 9th or 10th place on my list of places to go. But in Tartu, it’s about the best burger around. I also get a child-like sense of joy tell the wait staff I am from Texas. They are never as impressed as I think they should be. But then again, Estonians are rarely as impressed as Americans think they should be.

From Sheriff Saloon, I went to a coffee shop in the Tasku, which I call the “New Kaubamaja.” The old Kaubamaja (department store building) is seen outside the windows of this building. There’s actually a newer, fancier Kaubamaja then either of these, but I’m trying to pretend to be a true local by disdaining and ignoring its existence. 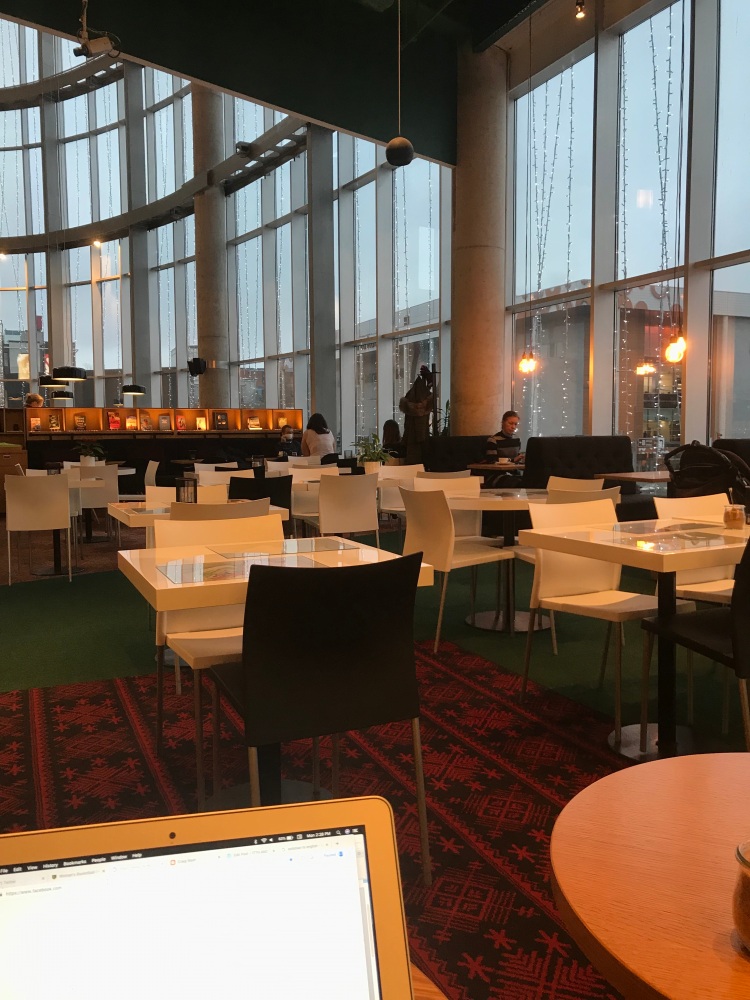 After coffee at the Tasku, I began the walk back to Salem, the church where I stay. I’ve figured I’ve walked this path over 200 times between 2015 and now. I’d rather walk it than take the bus, because it takes me through the Karlova neighborhood, my favorite place in all of Estonia. It’s where Barlova is, as well as Salem. It’s a little less than a mile from the city center to the church, a straight shot on Kalevi street. Kalevi is the name of Estonia’s most famous mythological figure. It’s also where they get the name for Kalev, Estonia’s most famous chocolate.

This is a text widget, which allows you to add text or HTML to your sidebar. You can use them to display text, links, images, HTML, or a combination of these. Edit them in the Widget section of the Customizer.
%d bloggers like this: